If you are looking to play fantasy sports in Illinois, this guide should help you get going.

Daily fantasy sports are extremely popular, and it is now completely legal in the Land of Lincoln. There are now some pretty awesome DFS apps and sites available for players in Illinois. We take a look at what the best IL DFS sites are and explain how you can join.

The popularity of fantasy football gave companies an idea of how to expand on that popular activity, and the daily fantasy sports industry was born. Knowing how to play fantasy football is a great way to start, but the DFS industry is much more complicated than that.

This industry continues to grow, and there will be some big changes coming in the future. For now, take a look at some of the top sites provided and get in on the action today.

What is Daily Fantasy Sports? 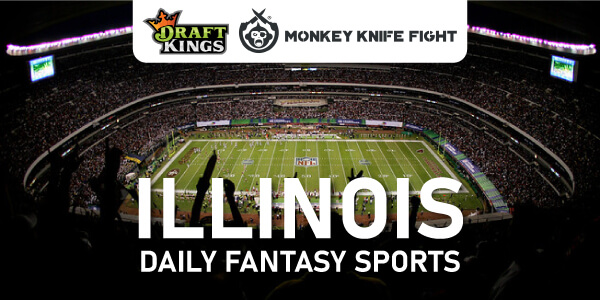 With all of the games, the goal is to create a team using a pool of players to rack up as many “fantasy” points as you can. Each sport also provides some unique twists to the games that are available, but football remains the most popular sport in the industry.

There are two main styles of play that you will find at daily fantasy sports sites in Illinois, and each style is popular with different groups of players. Here is a brief explanation of each of the styles of games that you will see at these sites.

In a head-to-head game, you are simply playing a fantasy game against a single opponent. This can be someone that you know, or you can simply challenge a random person.

Each person will then pay the set buy-in, and the winner of this competition will win the entire prize pool. Buy-ins are different amounts, giving you the choice of how much you wish to wager before creating your team.

Prize pool games are the other option, and this is a much different style of play than head-to-head. With this, you are competing against a much wider pool of contestants, and there are different sizes of games set up by the DFS sites.

To win some money, you must finish in a certain percentage of the top scores, with the top prize being a huge payout. You can enter these games for different amounts, and the prizes are different as well.

The status and legality of daily fantasy sports in Illinois was a bit hard to understand for a long period of time, but that all changed in 2015. That year, the Illinois Attorney General ruled that all DFS games are illegal gambling, but that didn’t stop operators from accepting Illinois customers.

A court case called Dew-Becker vs. Wu helped to get things turned around in the state of Illinois, as that case made it all the way to the Illinois Supreme Court. Dew-Becker was suing Wu for $100 after losing a head-to-head competition on a DFS site.

The Illinois Supreme Court eventually ruled in favor of the defendant, stating that daily fantasy sports games are based on skill rather than on luck.

This answers the question of “is fantasy sports gambling?” at least in the state of Illinois. Operators were now allowed to begin accepting Illinois customers once again, and Illinois residents faced no legal action for playing DFS games at one of the approved sites.

Where to Play DFS in Illinois

You won’t find any top 10 fantasy sports sites in the state of Illinois as there are just a handful of options out there. The daily fantasy sports industry has been dominated by DraftKings and FanDuel, but there have been some other operators starting to challenge the leaders.

DraftKings is one of the top daily fantasy sports operators in Illinois, and it is one of the most popular in the entire world. The Boston-based company now has over 10 million users in the United States, and it is a great option for Illinois residents.

This operator has a terrific mobile app that is available as well, and it can be downloaded on both Android and iOS devices. DraftKings has some very large prize pools, which is one of the biggest reasons that it is so popular.

FanDuel is a company based out of New York, but it is an option for players in Illinois looking for a DFS site. FanDuel has been in operation since 2009, and it is the second biggest DFS operator in the world.

FanDuel was acquired by Paddy Power Betfair in 2018, and that Irish bookmaker is one of the biggest in the world. This operator does offer a mobile app as well, but the online site is the most popular option.

Monkey Knife Fight is one of the newest DFS sites to hit the market, but it is available in Illinois as well. This company has taken a very different approach to the DFS industry, and the games are very different at this site.

Monkey Knife Fight is very similar to sports betting and is a great option for those customers that prefer that style of betting. This company has only been in operation since 2018 but is the fastest-growing DFS operator in the US.

FanDuel Sportsbook and DraftKings Sportsbook have quickly emerged as two of the leaders in the state, proving that they offer much more than just DFS competitions.

Both companies were actually placed in a “penalty box” when the industry first launched, but they have each gained access into the market by partnering with a land-based casino. If you are playing DFS competitions at each site, you can use the same account to access the sportsbooks. Want to bet on sports from your mobile in Illinois? Then check out the best IL sportsbook apps and see which are available.